The long-awaited blog, which will surely not live up to any expectations because I am not even sure I can remember anything that happened in April anymore. LOL 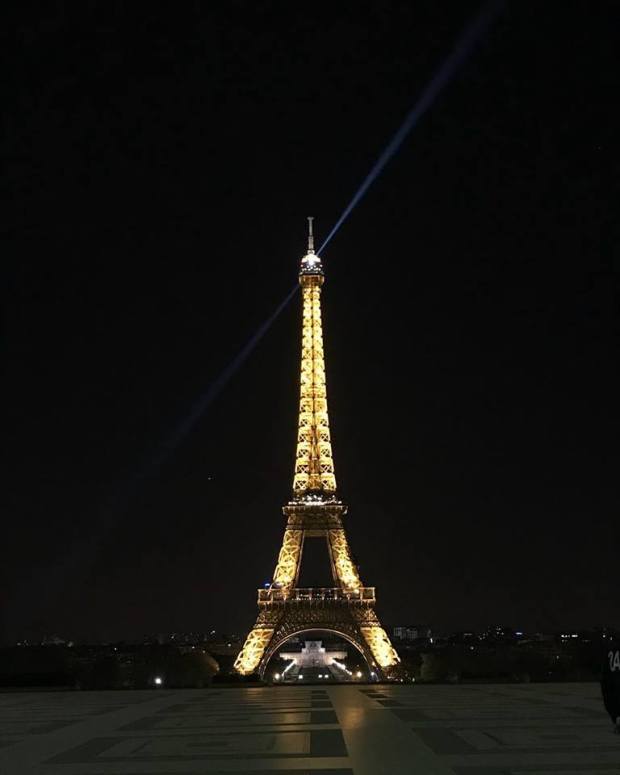 Hopefully I can go back in time and remember all the feelings I had while on our big French excursion. We originally planned the trip back in October or November.  I won an award at work that came with a little money and we decided we could always use it towards house things, but after our last loss in the fall we figured we could probably use a change of scenery and something fun to look forward to.  We debated where to go, but everywhere tropical was out because Zika.  Just not worth the risk <——this will be a theme. But, Kenny had always wanted to go to Paris, and had only been to Europe once for our Honeymoon.  Plus I really like wine, cheese and bread. So, it was a win win.

We had a lot of recommendations of places to stay and things to do which was awesome. My only requirement was that we didn’t spend the entire week in Paris, and that I wanted a little seaside portion which is how we ended up spending the last few days in Nice.

Plans went well, everything was booked.  We did buy the expensive *any excuse* vacation insurance, which I have always skipped because why would I ever not go on my trip?  LOL If we’ve learned everything in our few years of marriage it has been, buy the goddamn insurance because you just don’t know.

Turns out, we came close to needing it.  January comes around and my dad passes away, the next day we get a positive pregnancy test. Whilst literally trying not to get pregnant (apparently badly).  But now all of a sudden our purposefully planned trip to make us wait and look forward to something in order to “make decisions later” has become an accidental baby-moon slash dad-sad distraction trip.  It just took on a whole other meaning.

*In the meantime I also figured the pregnancy would end, like all the others had.  And that the trip would sort of go back to the original reason it was planned.* Just being totally honest here.  But, then, LUCKILY everything went totally normal. So, then I had to have all these “So I am traveling to another country while pregnant what the eff do I do” convos with my doctor. And I was incredibly unprepared for that.  They were so nonchalant about everything.  Which I am grateful for, but I was like I can’t be nonchalant about any of this.  More or less they told me the second trimester was the best time to travel, to relax and enjoy it. But, then there were some guidelines. This scenario was one I could have never actually pictured, so I couldn’t really fathom.

I’ve got a few general topics below that I sort of gathered my thoughts into.  But a few things you should know about me first.  One, I am very type A and typically pretty high strung, and not chill. (I know, I know, people who actually know me are reading this and yelling DUH at their devices).  But, when I am on vacation I am not like that.  I actually prefer underplanned trips vs. over-scheduled/prepped.  I think because I am on vacation relatively infrequently, I like to save up all my relaxation for there.  I save my money, so I can spend foolishly for a short time (so fun by the way, wonder what that is like for people who can do that all the time?).  I like to roll with things, eat whenever, go wherever, try things and places. So, keep in mind my preferred vacation style-as compared to my normal self lol-while reading these things.

Our trip started with me having a minor mental breakdown in the train station. After figuring out at the airport how to get the tickets, where to go, lugging all of our crap, we get on a train.  Then, it says this will be the last stop, or some pretty sounding version of that in French.  And we get dumped out at some random stop trying to figure out with all our luggage how to get to our stop. Also, I have to PEE SO BAD and there is no bathroom in sight.  We finally get to our stop and proceed to try and use a bathroom at several places with no luck and I think I might actually wet myself and just go home. Luckily Burger King for the win.  But we still couldn’t find out street and all the phone apps were failing us.  We ended up taking a taxi like less than a half a mile because we knew we were close, but couldn’t freaking find it.  Arriving at the hotel was so relieving I was close to tears.  Luckily it was a completely adorable place and they were super nice! Thank God, I thought I was going to lose my shit and we hadn’t even done anything yet.

One of the reasons I was most excited to visit France was the food. DUH. But, as the trip got closer, I was thinking about what I could actually have or not have.  What was “allowed” or frowned upon.  Basically all the food rules related to pregnancy are up for debate and mostly recommendations.  Most of the information I got was that most of the guidelines are based on protecting you and baby from food borne illness because your immune system is compromised when pregnant. So, they recommend you avoid certain things in order to avoid the risk of getting illnesses like salmonella, e coli, etc.  BUT, the likelihood of you getting those things is still low.  It’s just that your body can’t handle it like normal and the baby could suffer. These things to avoid change from doctor to doctor, or website to website.  Some are more strict than others, mine was kind of middle of the road.  But the general gist was avoid dairy that isn’t pasteurized (unless it is cooked), avoid undercooked meat and watch caffeine intake.  Also, deli meat is often a no no because of how it is cooked, and how it is likely to contain bacteria (unless you heat it to a high temperature).

Also, at the traditional French restaurant where I ordered a steak well done and they almost threw me out, we got to meet Jemele Hill and her mom and they were awesome and super nice.  She even took a pic with us despite trying to hang there on the DL.

For the record many pregnant women eat these things, even at home, and have no issues.  But, me and my rule following self, and knowing my history, it just wasn’t worth the risk.

Things you should know about France: they undercook literally everything, serve tons of cured meat, and don’t pasteurize 90% of their dairy.  So, you can imagine I had a lot of interesting food situations to navigate. I learned how to ask for everything bien cuit (well done) and then point to my belly when they gave me a dirty look.  We ended up eating a lot of Italian food, which was not the plan, but it was everywhere.  Not that they are that far apart, but I was surprised.  Luckily everyone was pretty accommodating, but I felt annoying to have to be annoying at every restaurant.  Trying to focus on the menu and make sure I wasn’t missing anything that I should have said no to. Even ordering Gelato was nerve-wracking because was this milk pasteurized?  And how do I even ask that question? AHHH.

Ultimately I ended eating my weight in bread.  Bread is safe.  I did indulge in some gelato, mostly the dairy free ones though, just to be safe.  And ate a TON of French fries which luckily were basically everywhere and delicious.  I would love to say I feel like I got the true French cuisine experience, but I don’t think I did.  I was just too nervous to enjoy it, so I stuck with the basics.  Will definitely be eating a lot more fun things if we ever go back.

Don’t have to say too much about drinks.  Even though I love myself a festive bevvie, I haven’t really found myself wanting one or being jealous of those around me. But….Paris is a whole other animal.  The entire city is sitting outside sipping delicious wine in cafes and I was like I will have sparkling water si vous plait.  I did find myself wishing we could do a wine tour or champagne flights or something. But it wasn’t too bad. My best friend was also in Paris with her friend, so we got to do a few things with her including seeing a risqué cabaret show that was actually awesome.  And what is a cabaret show without a bottle of bubbly?  They graciously gave me an extra glass and some nice sprite and I enjoyed my pretending.  I had never been on a vacation where drinking wasn’t a central part of it (maybe that is a problem?  LOL).  So, it was just weird to be on a trip where this was not a thing at all. Otherwise, I missed it less than I expected.  Although, if I am to go back, bubbles All.Damn.Day. 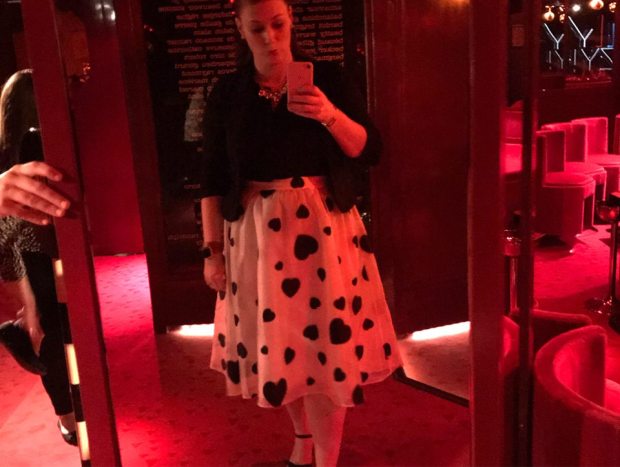 *Also, this outfit tho…

One thing I didn’t really think about before we went at all was what kind of physical activity I should be expecting during all the sightseeing.  I guess, that was dumb of me?  I was just like churches, parks, old buildings, museums, what could be so bad?  I just underestimated the fatigue and how the jet lag would hit me differently given my current sitch.  It was very cool to see the Louvre and Versailles and Notre Damn and the Eiffel Tower.  But I was freaking exhausted.  Luckily my feet hadn’t turned into swollen bricks yet, but the amount of mileage I put on my sneakers was atrocious.

Also, ALL THOSE FREAKING STAIRS.  I was sorely underprepared for the stair situation at a lot of these places.  I did a lot of heaved over, waiving people passed me to take a breather.  It was a struggle I was not used to.  But tried to pace myself.  Still got to see almost everything we wanted to, tired AF, but still there.

Also, bathrooms.  There weren’t any.  I had just started the time period (which hasn’t ended yet) where as soon as I pee, and walk away, I have to pee again.  So I would plan accordingly and then still be in a panic moments later.  I developed a keen eye for scoping bathrooms from a far, but it was still a little stressful. 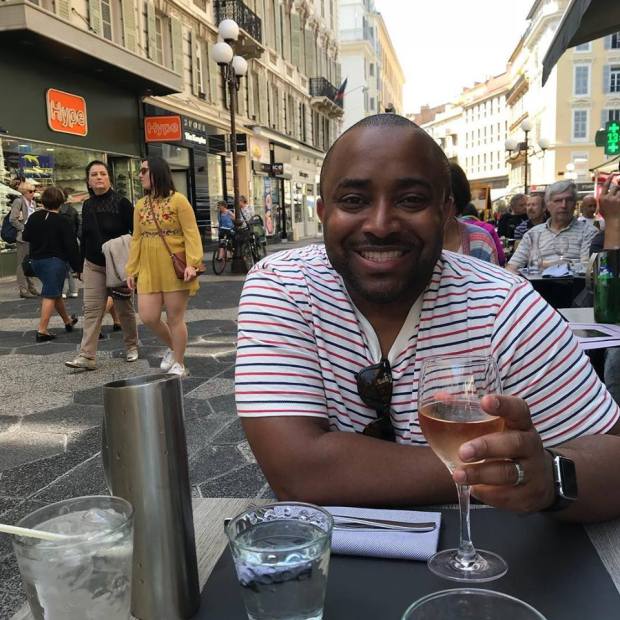 This is just a cute picture of Kenny 🙂

The trip was fun.  There were some good sights, good treats and a nice amount of relaxing.  But I’d be lying if I said it was the most relaxing trip I’ve ever been on.  I felt bad the whole time that I was reducing the amount of fun that Kenny was having because I was less fun. He would never say that, but I was not my “chill vacation self”. Not sure I would purposely plan a trip whilst pregnant again in the future.  Don’t know if it is really for me. But Nice, is dope AF and I would love to go back there.  Hit me up if you want to plan something for circa 5 years from now.