I don’t have an actual topic this week. So, I figured I would just list a bunch of things that “really grind my gears” related to this fertility nonsense. Because a lot of this sucks, a lot.  A friend of ours told me that me and Kenny were two of the most positive people he knew.  And I laughed.  I’ve always fancied myself a positive, hopefully person.  Really feeling like most often things will work out somehow, and that having a good attitude definitely helped.  Maybe not reach said goal, but at least putting you in a good head space to get there.  But I haven’t felt positive in over a year.  So, all I could say in response was “It’s hard to be these days.”

Figured what better way to celebrate my current lack of positivity than to complain about a bunch of things!  Here we go:

Ok, vent session complete.  LOL  Hopefully by next post I will be back to my (mostly) positive self. 🙂

So, we are off and running again. More drugs, more shots, more no-drinking (BLAH), more bruises, more chart to fill out, more morning up-ya-address (as my mom would say) ultrasounds.  And, luckily, the day after I started I got to fly to DC and bring my drugs and ish through TSA twice!

Living the dream, taking my medications in the bathroom of Logan airport. Can’t imagine a better Friday night.

Started IVF Cycle #2 last Thursday night.  This time, as I mentioned in a previous post, I am doing a microdose flare protocol which is slightly different than the typical plan. There are many different protocols based on the patient’s testing and particular issue.  They are all this magical concoction of suppression drugs, stimulating drugs and then trigger.  People respond differently, and as my doctor told me, “we learn through every cycle”.  Which was her attempt to make me feel like this was simply a learning process and not just utter devastation.  Good try, lady.

At the end of our consultation meeting following our first cycle, the doctor gave us two options.  She sounded hopeful.  Which was nice, because I was in Mach 5 DOOM zone.  Even though things went not as planned at all, she said everything on my end worked just fine. Just fine?  So you’re telling me this isn’t my fault?  Because I’ve been blaming myself for this for over a year and a half at this point.  While there wasn’t a particular cause she could point to, she said unequivocally that everything on my end was working exactly as it should and responded well to the meds. 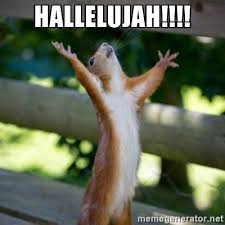 It was the first time in this entire process where I had a slight sigh of relief.  It was weird though, because the result was the same.  We had no healthy embryos to implant, and that was awful news.  But just the thought that this wasn’t my fault was a tiny beacon of light in the midst of everything else shitty.

I responded well to the meds the first time, I had 9 eggs at retrieval.  That is a good number, but they’d like 10-15 ideally.  Especially in my case, since for a reason unknown at this time, we lose a lot of embryos between day 3 and day 5.  When she told me that, it made a lot of sense, because all of my miscarriages have been right about 5 weeks (except the ectopic which was a whole different, long nightmare) which would be day 5-6ish after fertilization.  It’s a trend they can’t really explain.  It is possible there is some fragmentation coming from the DNA in the sperm, but it may not be that either. So, per usual…it’s a mystery.

So, the goal would be hope for a higher number of eggs, with another high number fertilized, and then a higher number to send to testing resulting in a higher number which test chromosomally normal. With that goal in mind, she gave me the two options.  Do the same protocol again, with high dosages which worked last time.  Or try this microdose flare, it is a somewhat more aggressive approach that can produce better results but can also have worse side effects.  Like over-stimulation which could cause: inflammation that makes you look 8 months pregnant.  Just what every woman doing IVF could hope and wish for. LORD.  It is typically used on women who are older or whose ovaries didn’t respond well to the traditional stimulation.  While mine did respond, this method seemed like it made the most sense to try and get the most eggs possible.  We know from science that you will lose things along the way, so the higher number to start, the higher likelihood you have something at the end. Why not try something that could give us a higher number to start with and then hopefully a higher number at the end (anything is higher than 0!)?  Plus, I was lucky enough not to have any crazy symptoms the first time.  My mood was pretty good, and I didn’t have the exhaustion or bloating people warned me about.  So, the doc seemed to think this flare could work.

At this point, I’m like do whatever.  Shoot me up with vampire blood if that will work (that’s weird, but it’s the first thing I thought of).  But, one week in, still feel ok physically, but the emotions and moods are ALL OVER THE MF-ing PLACE. #SorryKenny.  This type of cycle is typically a little slower so I am anxious to see how things start shaping up and how long I have to wait for retrieval again.  But it will be soon!

*On a totally unrelated side note, anyone who has been through IVF or witnessed it. I highly recommend you check out the HBO show Friends from College for a hilariously accurate, while also painfully accurate, display of a cycle (episode 4).  It made us laugh so hard and also made us (and by us I mean me) sob.  My favorite line from the woman having IVF was something like “You don’t know what Ia m going through right now, it’s like having a shitty full time job on top of my shitty full time job.”  I actually like my regular job, but still.  Keeping track of all this and the pressure to not mess something up is so on point. It is DEAD ON.

Wrote a blog about it, like to hear it? Here it go…

If you didn’t read that to the tune of En Vogue’s Free Your Mind then we can’t be friends. JK. But not really.

Honestly. Who the F*CK came up with the term advanced maternal age?  Like, seriously. Come up with a new one, please.  Something like maternally fabulous or flirty fertile or something cute and hashtag worthy.  It has this ominous tone and is something most of us dread (or are dreading or already dreaded).

It is the eve, eve of my A.M.A. birthday (that just sounds more like an award than a diagnosis to me, so that is what I am going with) and I am NOT PSYCHED about it.  I don’t know how many of the readers are pre or post A.M.A., but regardless it just has this dark cloud, danger zone vibe to it.  I’ve been dreading it, to be honest, for years.  I always just had this “have to get my baby making life together before 35” feeling.  NO PRESSURE or anything.  I know so many of my lady friends know what I am talking about.

And, all my single ladies….many are thinking the same thing.  I’m 35 or almost 35 and I am single and what if I want a family too.  It’s not just us old married broads thinking about this stuff. And it’s a combination of society, and media, and medical professionals, and a whole bunch of others who are basically saying hurry up before you’re 35 and your eggs are all hard boiled.  But what if I want to work on my career?  Or what if I want to travel?  Or what if I am living my life?  Or what if I am trying to meet someone and would love to, but it just hasn’t happened yet?  Or what if you’ve been accosting your boo thang for 5 years to propose to you so you don’t have hard boiled eggs, but he is slow and steady and took forever and now you’ve been trying to 2 years prior to 35 and still haven’t gotten anywhere?  (*Asking for a friend).

It just sucks that there is this real/imaginary line that once you cross or as you’re about to cross, those of us who want kids, have this sharp uh oh feeling that flows through our bodies.  And, there have been so many unbelievable inroads made with assistive reproductive technologies that many more people are able to get pregnant after 35 and after 40 and so on which is amazing.  But the fact remains.

There is also science behind that age.  As my GYN said to me many years ago before I was even engaged, and I was asking her about this stuff (self-fulfilling prophecy I wonder?); “there is not some magical shut off valve that happens the moment you turn 35, but things do start to become more challenging”.  So, she was trying to get me not to freak out about the actual day.  But there are some real statistics behind challenges with pregnancy after 35; about ability to get and maintain a pregnancy, about possibility of defects, and even about likelihood of IVF working.

So, the fear is real people.  It doesn’t mean it can’t happen, but it does mean it gets a little harder.  And for someone whom it has already been hard, it is a little scary. There are even a bunch of procedures and tests that will now be magically covered for me after Saturday (bonus I guess?).

But, as much as I am not excited to bear that A.M.A. title, I am also pretty god damn ready to say deuces to 34 as well.  There were certainly some pretty lovely moments, but 34, for the most part, you can kick rocks.

So, cheers to 35.  And I do mean cheers because we’re having a party! And I won’t be able to drink in a few more days when I start my next cycle; microdose flare here we come.

Thanks to all of you for reading this and for your support throughout this process and for helping me #keephopealiveat35. It ain’t over till the fat lady sings!