I feel weird writing this one, but for anyone who hasn’t had a child in the NICU or a family member, it is really hard to understand that experience. I should also preface that in the general scheme of things we were EXTREMELY lucky.  There were babies in the NICU that were very sick and required a lot more care and intervention than Liam did.  But all the families and parents in there can relate to the overall experience. I think the biggest feeling I experienced in there was that this was just not what I pictured.  I pictured going to the hospital with my hospital bag packed.  I pictured the baby being born and put on my chest for bonding time and having him sleep in my room.  And having visitors to the hospital to meet him bringing balloons or flowers. And leaving the hospital two days later totally not ready to take this show on the road.

I did not picture driving feverishly to the hospital with nothing that I needed, or having him be born only to have the nurse hold him up in front of me and then wisk him away or sleeping (somewhat soundly) in the hospital room with only the sounds of other people’s babies down the hallway to wake me up. Or leaving the hospital in a wheelchair with an “It’s a Boy Balloon” but with no baby in my arms and random people asking me where the baby is…

It’s just not what you imagine and it is so emotionally taxing. Even for those of us lucky enough to have a relatively short stay and relatively few complications.  My friend who had a daughter born with a health condition called CDH and had surgery at just a couple days old, posted this video on Facebook from Motherly Media that shows a little about what it is like to have your babe in the NICU.

I sort of compiled a list of some of the craziness related to having your little one in the NICU.  I’m sure it doesn’t include everything, and I wish I took more pictures, but this was the general gist of our experience for the first 10 days of Li’l LJ’s life. 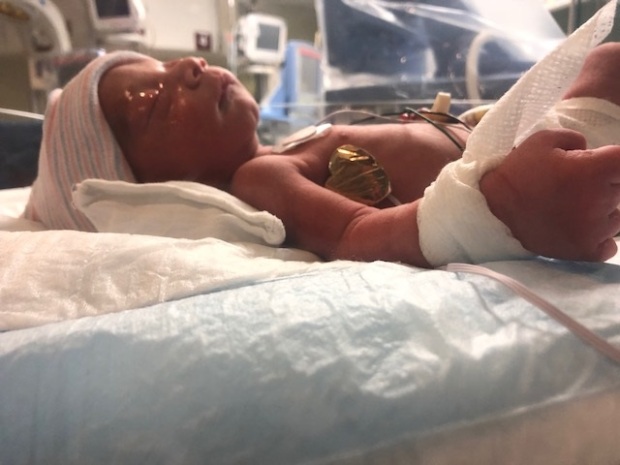 So many cords.  But look at that little butt chin! 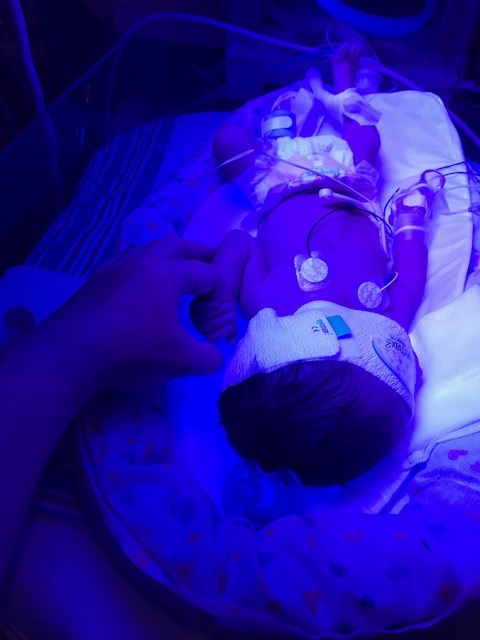 I just needed a little tan! 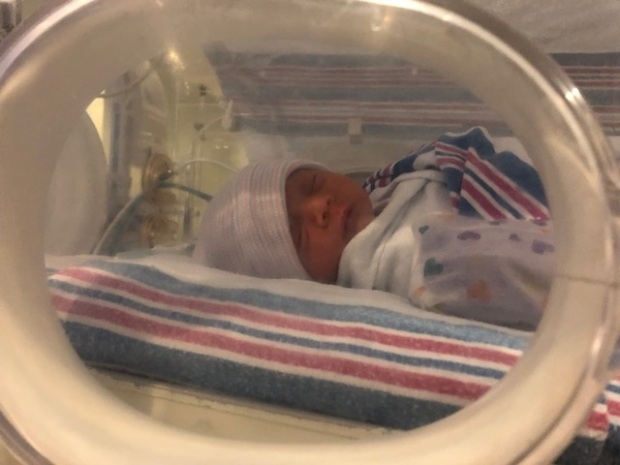 Very challengin to change a diaper through this hole!

Overall, like I said, we were incredibly lucky.  There were moms who went back to work because their babies were in the NICU for so long.  They would come in as we were leaving with their cooler of milk dressed in their work clothes.  There was another baby in our nursery who coded while taking his vitamins. After a couple of minutes of chaos, we hear the nurse say “Well, welcome back sir.”  Terrifying.  Can’t imagine what that mom was going through.  Another baby was readmitted after her and her twin were released, and the parents didn’t listen to the no visitors rule, ended up being treated for meningitis.  All in all our NICU experience was positive and on the low scale of risky.

But for first time parents, especially after everything we had been through to get to this point, that shit was scary as hell anyway.  As was taking him out of the hospital right into a 4+ hour drive back to Massachusetts.  NOT the chillest road trip I’ve ever been on.  But an amazing feeling to be wheeled out of the hospital 10 days later with baby in the baby carrier and headed home.  Who knew when we picked the name Liam, that the meaning Strong Willed Warrior would be so on point!

Up next on the blog, the first few weeks home, or as I like to call it Groundhog Day.